Home city guide religious spots in and around bhiwadi

Religious Spots in and Around Bhiwadi

India is a country that is famous throughout the world in the form of Land of Spirituality. Rajasthan is one state in India that is known for its possession of some of the most widely visited religious places in India after Gujarat. There are many localities and cities of Rajasthan that possess certain beautiful religious and spiritual spots that are looked forward to be visited by people. Bhiwadi is one such place in the Tijara tehsil of Alwar district that is visited by people for experiencing spiritual power and even for understanding the real meaning of religion. Bhiwadi is one town in Rajasthan that not only consists of temples but it also consists of mosques, churches and gurudwaras too.

Bhiwadi is a multi-cultural city and there are many religious spots located in Bhiwadi. The people living in Bhiwadi belong to different communities and it is only because of this reason that the Bengalis celebrate Durga Puja in Bhiwadi and the people are also found celebrating Ganesh Chaturthi in this town. The people of Bhiwadi are connected to each other with religious sentiments and they are found to be religious minded people.

Some of the most popular religious spots that can be explored in and around Bhiwadi are the following:

Ganesh Temple in Bhiwadi is first of its kind because it is dedicated to Lord Ganesha sitting along with Rani Sidhi and Ridhi. This temple is located at Ganesh Pole that lies very close to Gandhi Park, Machari Road in Rajgarh. Rajgarh lies very close to Bhiwadi in the district of Alwar.

Pandupole and Bhartrihari Temple is located in the hilly area of Sariska in the district of Alwar in Rajasthan and it is considered to be one of the most famous religious spots in Bhiwadi.

Radha Krishna Temple that is located at Khairthal in the Alwar district is a very old temple of the Pushkarna Brahmin Samaj. 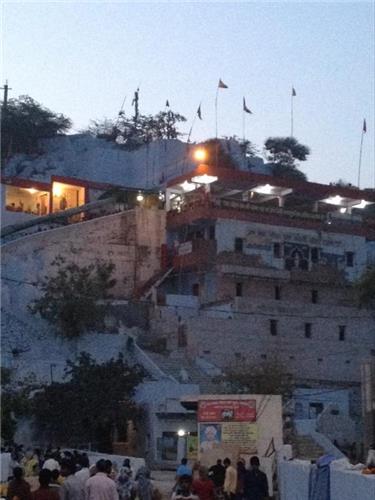 Baba Mohan Ram Milakpur Mandir is located in Bhiwadi and it is only because of the possession of this Mandir that this sleepy and small town in Rajasthan has been transformed into a famous pilgrimage center. This Mandir is dedicated to Baba Mohan Ram Milakpur who is considered to be the rider God on blue horse while some are of the view that the God is a manifestation of the Hindu God, Lord Krishna. The temple is visited by a large number of devotees every day and the numbers of devotees are thousands on certain festivals and special occasions such as Dauj that comes after Holi and Raksha Bandhan.

Religious spots in Bhiwadi are many in number but all of them have not been maintained and cared for in a better way. Therefore only a few of them are visited by people during their vacations.